¤ Login
¤ Home
¤ Member Services
This area is only for registered members of theArt of Skateboarding.
Become a member! Register today and enjoy all the benefits!

NHS is releasing a reissue of the "Villain" deck from 1989 with graphics by Justin Forbes. You might remember that this was the SECOND, altered version of that deck after SMA received a cease & desist letter about using the "Joker" character in the first release. Per the folks over at WeBringJustice "This reissue comes in limited quantity, manufactured by NHS and part of the money will go to a cancer fund for children in accordance with JT wishes." You might recall that Jim got involved with cancer charities after learning about the amazing young Johnny Romano and the foundation in his honor, Johnny Kicks Cancer (johnnykickscancer.org.). 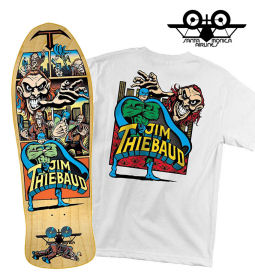 General Site Updates
@ Got News?
Think you have some news of interest to the Art of Skateboarding members and visitors? Well, drop us a line and send it in! Skate Art Shows, skate sessions, trade shows, etc....we want to hear about it!
CONTACT US !